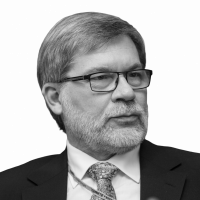 Mr. Andrey Tsyganov was born on May 28, 1961 in Perm. In 1983, graduated from the Moscow State University (MSU) with a diploma in economics with honors. In 1986, finished the postgraduate program at MSU and defended a PhD thesis in Economics on planning and organization of economic administration. In 2000, graduated from the Russian Presidential Academy of National Economy and Public Administration with a degree in law. In the beginning of 90-th participated in some international training programs including the one organized by the Ministry of international trade and industry of Japan (Tokyo) and a mid-term internship at the Directorate-General for Competition of the European Commission (Brussels). After several years of practical experience in industry (deputy chief of economic and planning department of Gorky Automobile Plant production association) and public administration (leading specialist of Department of economics and management of a machine-building complex in the Machine-Building Bureau of the Council of Ministers of the USSR), since 1990 works at the Russian federal competition authority (Advisor to the Chairman, Head of Division, Head of Department). Since 1997 - Secretary of state – Deputy Head of the State antimonopoly committee of the Russian Federation. Since 1998 - Deputy Minister at the Ministry of the Russian Federation on antimonopoly policy and support of entrepreneurship. Since 2004 – Deputy Head of the FAS Russia. Elected for several years as a member of the board of directors – state representative at Rosneft JSC, Svyazinvest JSC, Slavneft JSC, Transneft JSC. Actively participates in legislative activities. One of the main developers of the antimonopoly legislation, including the Law of RSFSR “On enterprises and entrepreneurial activities” (1990), Law of RSFSR “On competition and restriction of monopolistic activity in commodity markets” (1991), Federal Law “On state support of small enterprises in the Russian Federation” (1995), Federal Law “On natural monopolies” (1995), Federal law “On protection of competition” (2006) and its further amendments and supplements, relevant chapters of Treaty on Eurasian Economic Union and its annexes (2014). At the FAS Russia, works on issues of international economic cooperation, control of foreign investments to economic entities with strategic significance for state defense and security, control of the agricultural and food industry. Member of a number of sub-commissions of the Governmental commission on economic development and integration: sub-commission on non-tariff, customary and tariff regulation, defense measures in foreign trade; on ensuring sustainable development of the Russian economy; on technical regulation and application of sanitary, veterinary and phytosanitary measures; member of Observation council of Federal state budget organization “Foundation for development of small enterprises in scientific and technical area”. Chairman of the FAS Russia’s Commission on analysis of commodity markets and the FAS Russia’s Methodical Council, as well as Expert councils on foreign investments and on agro-industrial complex. Andrey Tsyganov actively participates in the work on the FAS Russia’s cooperation with international organizations and foreign competition authorities in the area of antimonopoly policy. Represents the FAS Russia at international events in the frame of BRICS, APEC, OECD, ICN, ICAP, UNCTAD, conducts bilateral negotiations on behalf of the FAS Russia with heads of foreign competition authorities. On the regular basis participates in the ICN annual conferences and roundtables as speaker or moderator as well as represents the FAS Russia in the ICN Steering group meetings. Andrey Tsyganov is a leading research associate of Chair for competition and industrial policy of the Department of Economics at the Moscow State University. Co-author and editor of manuals for students of leading universities “Competition and antimonopoly regulation”, “Competition law of the Russian Federation”. Member of editorial boards of magazines “Russian competition law and economics”, “Competition and law”, “Competition today” (editorial board chair). Author of numerous articles in compendia and periodicals. By Decrees of the President of the Russian Federation for professional achievements and longstanding diligent work received the “Order of Friendship”, was awarded II class Medal of the Order “For Merit to the Fatherland”, was awarded a title “Honored economist of the Russian Federation". By Decree of the President of the Russian Federation possesses qualifying category of II class current state counselor of the Russian Federation. By a decision of the Supreme Council of the Eurasian Economic Union was awarded a medal “For contribution to creation of Eurasian Economic Union”. By the FAS Russia’s orders was awarded a title “Honorary employee of antimonopoly authorities of Russia” and a medal “For Excellence in Service”.